Gravelines our entry point to the canal system. Tamara was de-masted by the french guy's at Gravelines chandlers, this took about half the time we would have done it at Blyth. Amazing speed, it was lifted clear re slung on the quay and lowered straight back on deck. The overhang wasn't all that great about 6 ft. 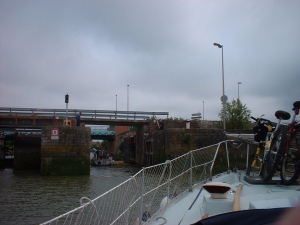 The Gate way to the canals

The rest of the equipment was stripped off and we were ready for the canals. On arrival at Gravelines we made enquirers with the port as to entry times, we were told to be rafted onto La Royal for 1330 hrs on Tuesday. The port guy's turned up and prepared the sluice gates and we had t wait until the levels were equal on either side as this is not a lock. Once level Paul with his wife Jane and their two sons Achy and Lou went through first closely followed by us. The next obstacle is just around the corner and is the lifting railway bridge, which the port guys inform of our presence but you have to wait for them to attend and open the bridge. We were reasonably lucky we only waited 15 minutes. Between here and the Guindal system are three lifting bridges that the port guys operate, they follow you along the canal by van and have everything ready for you as you arrive. Once past Guindal canal junction the bridges are manned and they are informed of you presence by the port guys. At the first of these bridges is a small pontoon where if you are the only boat in the section, they pull you over and check all the vignette details. It's worth remembering that the only place you can get the vignette's are Calais and Dunkerque, if you get this far and don't have the correct paperwork, these guys can impound your boat and send you off to correct any deficiencies, you will also be find for your trouble. One point to mention, this part of the system is supposed to be maintained to 1.8 meters, where the Calais canal and the river L'Aa meet we touched the bottom, very briefly but enough to slow the boat so that knew you had touched.

Tom, les and Winston
Our first stop in this section was planned for Watten, a little canal town 15 km from Gravelines, where we had arranged to met Tom, Les and Winston who had passed through the sluice on Monday. Sure enough as we round the corner into Watten we heard Tom's klaxon on his boat and they were waving from the pontoon, waiting to catch our ropes. The moorings here are scarce and the town hasn't a lot to offer but makes a very nice one night stop over. There are six more pontoons tucked away in a side canal about 200 meters further down on the right, blink and you miss it. These were put in by the local council and seemly forgotten, hence you can never get a place because some boats arrive and never leave, because it's free. The town has a Netto and an intermarche both with good prices for restocking those vital supplies. The only problem with the pontoons we stayed on is you are vulnerable to the wake of passing peniches, so make sure your tied up sufficiently.

Services- none just the pontoon (free)

We had to move early as the distance to cover included three locks and these would take some time to negotiate. The passage to the locks is straight forward, the first lock in the system is Flandre. Unfortunately the lock keeper here doesn't like pleasure craft and has been known to delay the passage of small boats if no commercial traffic requires the lock in the opposite direction. Flandre is a large lock by UK standards and the method of tying up is a little unusual. You attach you self to a bollard at deck level, with enough rope to allow the boat to rise to the full level of the lock, then pull the rope through to leave. We found this would work for a power boat with straight sides but not a yacht with curved sides. So we used the ladders rung by rung to attach a fore and aft line in order to keep the boat under control. The lift here is quite small, about 5 meters. 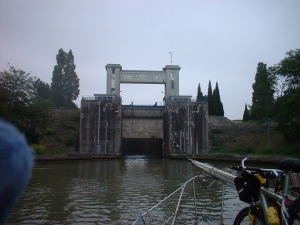 The new lock at Fontinettes

The next Lock is Fontinettes and is the biggest lock I've ever seen. However before you arrive their you pass the old boat lift witch replaced the five locks which previously completed he lift of thirteen meters. This boat lift build in 1889 was a masterpiece of engineering using simple counter balance principles to lift boats for the lower lever the 13 meters to the upper level in one move. It's open as a museum and well worth the visit. Just around the corner is the new lock, over 200 meters long and completes the 13 meter lift in one. This lock requires 39000 cubic meters of water for every lift. Securing inside the lock if a reasonably simple one as they have supplied floating bollards built into the walls. Once inside you can't but be amazed at the size of it. Surprisingly enough even though a large amount of water enters the lock in about 15 minutes the turbulence is low and the lock keepers obviously reduce the fill rate for small boats. 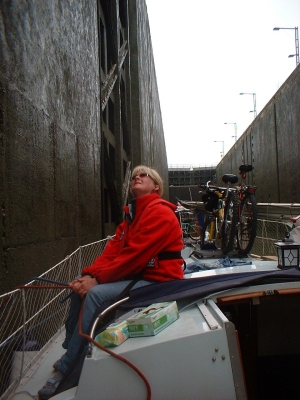 Debs in the Ecluse Fontinettes
The third and final lock of the day is at Cuinchy this is the baby of the bunch with a lift of only 3 meters, We had to wait a little while as there was commercial traffic using the system. The principles are you give way to the first peniche and then your allow to enter the next time. We had to wait for three peniches to enter and leave ( you cant argue with 1500 tonne of steel when you only weigh 6.5 tonne) The sides if this lock are worth watching as they reminded me of a cattle crush, you have to keep your boat secure but away from the walls or you'll loose your fenders under the rails and they'll be either ripped off or punctured which is what happened to Paul and Jane's. From here it's a short distance of about 6 km to La Basse, there are no signs for it so you have to use the map and know where you are. Getting in isn't easy either and really the place isn't worth it. Again it's supposed to be maintain to at least 1.8 meters. We were constantly in under one meter and at one brief point down to 0.1 meter. The mooring is in a disused industrial complex. We didn't stay, We pulled back out to the main canal where there is an area for the peniches t moor and tied up there for the night. Very nice, quiet, no problems from the peniches as they stop running around 2100 hrs. Services- not good, however plenty of excellent mooring possibilities along the way and there all free