Our second season on Tamara

live your life and be happy, regardless of what others think!

The second season was spent sailing up and down the North East coast. Putting into practice the navigation techniques that I have learned during the two courses under taken. Increasing our distances and time at sea, we also had to spend time lying at anchor as we'd lost ours in the first weekend of the first season. The first occasion was to be at Tynemouth just behind the harbor wall, known as the haven, under the priory. With the wind in the North East we expected a reasonably quite night. I calculated the depth for the hour of tide, dropped anchor, checked it had taken, set all the alarms on the Raymarine kit, this would tell us if we were moving more than 4 meters in any direction. However the night was long, wet and cold. We even dropped a kedge anchor which stopped us turning with the tide, but the swell crept in around the piers and we had an uncomfortable night. Second night spent at anchor was Newton, well not really at anchor, we couldn't get it to hold so we picked up a buoy with a very heavy chain attached, went to bed feeling very secure. At midnight the alarms were going off all over the place. Being dark we couldn't see where we were. But morning revealed we had dragged the buoy out to sea by about 300 yards, lucky not to hit the rocks on our port side. 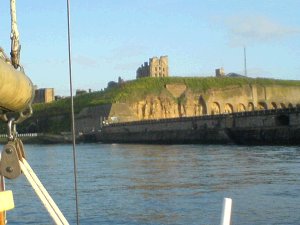 Holy Island one of the targets for this season, to sail up through the Farnes, lie at anchor over night, spend some time with Pat and Thelma on the island and return to Blyth without problems. As it happened it worked out spot on we were the only boat not to drag it's anchor that night out of 15 boats in the anchorage. Above are Andy, Debs and Davy who had also sailed up on Thumper pictured on the left.We went ashore for an evening drink, as you do! Forgot to put the anchor lights on, on our return at 2330hrs, with the ebb running through at two knots we couldn't row back to the boat against the tide, 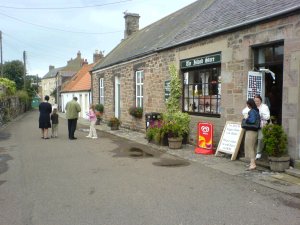 so we needed a tow from Andy. The next weekend Andy got my outboard to service. It was that dark in the anchorage we couldn't find the boat. Passing one yacht a face appeared in the cock pit and a little voice came "what you looking for" "Tamara a moody 33" was the answer. "She's over there" followed by the duump of a powerfull search light which lit her up after a couple of seconds searching. Safely back on board, Deb tucked up in bed, it was time to sit in the cock pit on anchor watch and I knew it was going to be my turn all night. Never mind the solitude allows time for serious thinking about the future. 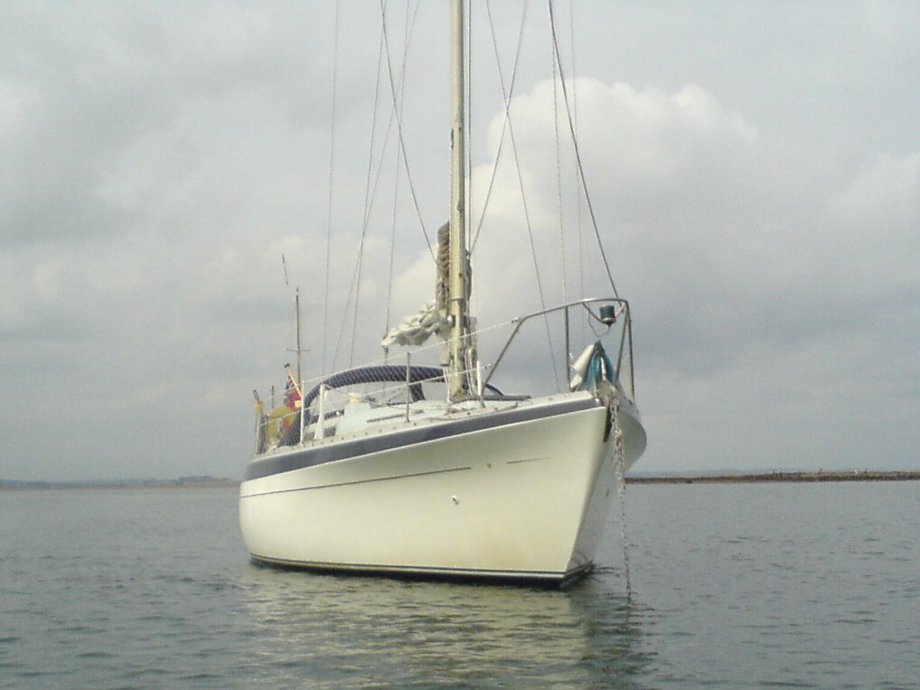 It was probably going to be the last cruise of the season, It was suggested that we leave early on Saturday 1030hrs or 1100hrs for Hartlepool, it was a low spring tide and would turn at 1030hrs which would gives us a fair tide for the journey . There was going to be six boats. After some questions about the weather and the expected wind, which was forecast F4-5 (gusting to F7 at times) Westerly for Saturday and F3-4 South Westerly for Sunday.This was just as good as it gets for this time of year for a southerly voyage. 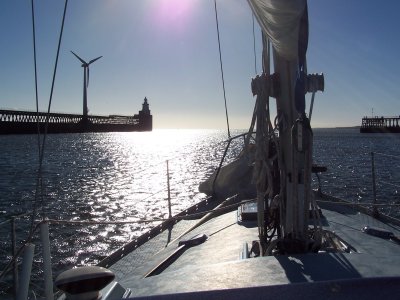 We left Blyth in clear skies, Due to the weather forecast we decided on reefing the main down too two thirds of its size, a smaller genoa this would save us changing sails later if the wind picked up. We were closely followed by Thumper and Patrica, with the strength of wind around the 20knots mark we began to leave them behind, making St Mary's lighthouse in 40 minutes from the piers. The wind increased steadily rounding us up several times. It was in the middle of one of these events, over the VHF came a strong wind warning from the Coast Guard, warning of imminent strong winds of F9 or more. At this time we were getting hit by 40knot gusts. A quick radio call back to Andy on Thumper, to make sure he'd heard it and to see if his thoughts were the same as ours. Which was to head for the Tyne and Royal Quays for the night. Peter who was out in front was going on and would reach Hartlepool, a quick radio call to Tyne harbor and we got the all clear to enter, a short trip up river to the marina and tied safely along side as the wind increased. After everyone arrived and was secured we arranged for a night out in the Maggy Bank, always good food and live music on Saturdays, with good company and a good group it ended the night well. A short walk back to the marina, a glass of wine and off to bed to listen to the wind increasing during the night. The next morning all was calm, the wind was in the South West about 8 knots, the clouds began to gather and the forecast was to deteriorate as the day went on. The decision was taken to leave at 1100hrs for the journey home. Once out the piers the wind increased and was to remain at an average 18knots which give a quick journey home with Tamara reaching speeds of over 8 Knots.
High lights of the trip, 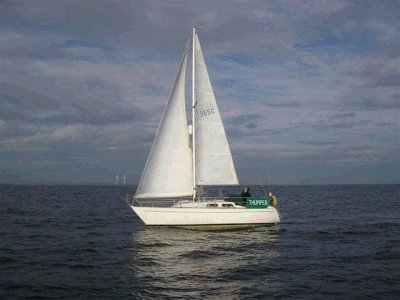 a lively sail to the tyne, a good night out, one of us fell in the marina (not due to Alcohol), OH YES and we whooped Thumper on the way home! never mind Andy 2-0 not bad, we'll let you win next time.