I thought Northumberland had some castles, we've got nothing compared to these. I have never seen so many (well over a hundred on the Saone and Rhone alone) and in excellent condition. Most are still lived in as family homes. 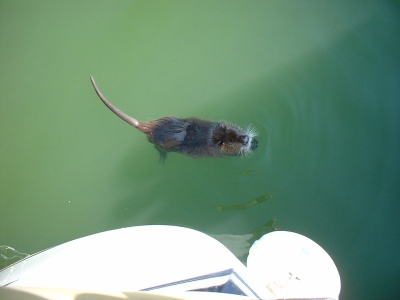 This little fellow, at Valence actually comes to the boats and knocks on the stern to be fed, Clive was fishing and felt a tap on the elbow when he turned around it was sitting beside him.
The photo's not that good but he is about 1 m long.

Services- you have to plan your steps very carefully, as most of the pontoons are shallow, which is why we were on some days having to complete 80 km. All the locks have pontoons on either side but these are for waiting, the only time the lock keepers will allow you to stay over night is when you've arrived to later to enter. You must leave at first opening 0700 hrs. 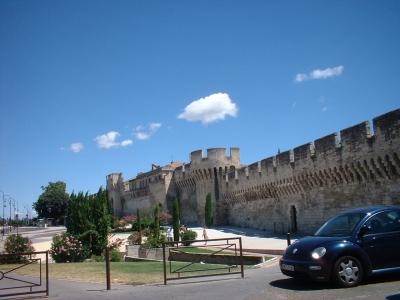 The old walled city of Avignon
It pays to ring a head and check the depth, one such halte is Viviers, shown in all the books as 1.2 m (far too shallow for us) on our approach we phoned and were told that the depth was 3 m. We crept in very slowly to find that the depth was 3 m and new pontoons had been put in to accommodate deeper draught boats. 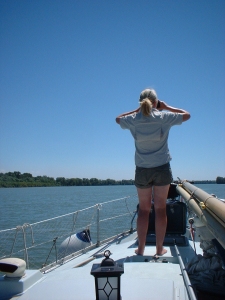 Captain Debs on Watch
Viviers is a place that must be visited, it a wonderfully historic town with small narrow streets and the Cathedral on the hill in the centre of town (this is where we also bumped into a woman and her hubby, who I used to go to school with from Ashington) 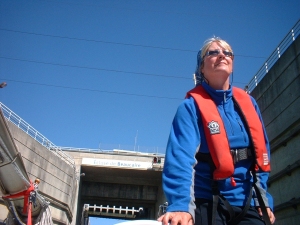 on the helm leaving Beaucaire lock, this is the last lock of the rivers. With only the Seagate to go through
The weather on the Saone and Rhone was kind and we only had four days of mistral from the North but that didn't stop us, at times it was gusting up to F7, little white tops and waves that were spraying over the bows, only hours later just before Port St Louis I was pouring buckets of water over myself and the cock pit floor to cool down. 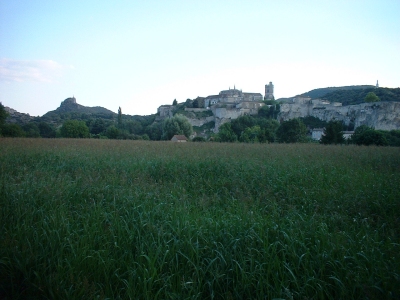 Viviers
So at 1550 hrs we entered the final lock on the French inland water ways, it's not really a lock but more of a sea gate much the same as the one we entered through all those weeks ago. The system here is different as there are no bollards to moor to, instead there are ropes hanging and you have to hold on. Having said that this lock only varies in height by 15 cm, and when we were in it didn't at all because the sea level and river level were the same. 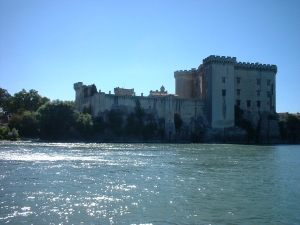 Beaucaire castle one of many on the Rhone and Saone

So at 1600 hrs on Tuesday 31st July we sailed out of the lock into the Med, at 1700 hrs we moored in Port Napoleon where we are to stay for one week to sort the boat out. The mast went back up on 1st August. 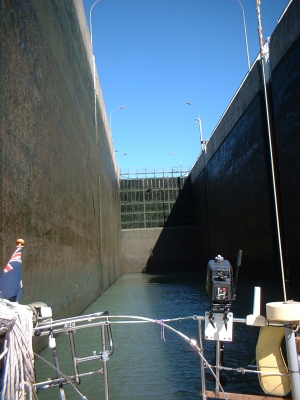 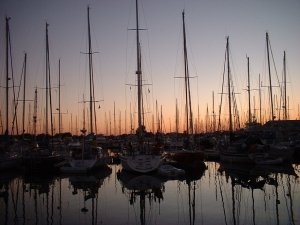 So we got there, it wasn't to be for long as Debs health deteriorated and we had to return home.

Things appeared to be getting better then took a turn for the worst. At the moment Debs is waiting to go into hospital on the 23rd for an operation to hopefully sort out her problems. And this is how we got home.

We had arranged for Tamara to be lifted out of the water and stored at Port Napoleon until we had decided what we were going to do. At 1200hrs we left for the train station and the 1430 hrs tgv from Marseilles to Paris where we spent the night in the Ibis hotel and flew to Newcastle on wed 8th at 1600hrs.

The boat was transported by road to Gravelines and on August Bank Holiday I flew back to France to reassemble the boat and sail her back to Ramsgate. This was to be my first time single handed. Needless to say I didn't tell Debs or any member of my family when I was sailing as this would have only caused more worry. Instead I text Debs when I was 30 minutes away from Ramsgate to let her know I was back in the UK. The crossing was good with 15 kt NW winds and traffic was busy but not heavy only once changing course to steer behind a very large tanker of 32m draft. I checked the chart and the low water depth at that point was 35 m, no wonder he asked me to go behind as he couldn't move. Over the next few days we made arrangements for Debs to get a train to Ramsgate and we would sail back to Blyth together.

So September 1st we sailed from Ramsgate to Harwich(40 mile)setting a course that would take us to the Kenntish Knock buoy and then back west to the river mouth. Leaving Ramsgate at 1200hrs to catch the ebb tide to take us north, we arrived at Shottley point marine at 2130hrs and were lucky enough to be able to lock straight in, other boats were having to wait until there was sufficient depth of water over the sill.

1200hrs we leave Shotley point for Lowestoft, this would give us the last hour of the flood tide and then a full ebb to take us north. Once again the electronics begin playing up with the auto pilot locking up and becoming inoperable. This is concerning as the next leg is a 25 hr 140 mile trip. The trip it's self was fairly uneventful with the exception that the entrance to Lowestoft is very shoal and we had to head back to sea to gain depth as at one point we were in 2m of water 1.5mile from the entrance. The weather was deteriorating with the wind veering to the Northeast, we were pleased to be inside moored up which is where we would stay till Wednesday despite planning originally to sail the very next morning.

The weather dropped off and the winds picked up so after making enquiries with the local lifeboat skipper on both Mon and Tue and aborting both days. Finally there appeared to be a weather window of two days of light NW wind for Wednesday and Thursday. Passage plans were put together, all the waypoints entered and at 0600hrs we left Lowestoft with the ebb tide with us for the next 6 hours, this would see us in the middle of the wash by the time it changed direction. The plan was formulated with the crossing of the Humber timed at 20-2100hrs that night and arrival at Scarborough for around the 0700hrs on Thursday. The weather improved and we had a great sail North accompanied at times by pods of Dolphin and Porpoise, crossing the wash in near flat conditions was a great relief considering the conditions that can be encountered. 0430hrs off Flamborough Head out of the gloom came the first pot marker just skimming down the side of the boat and in 37 m of water, after that they came thick and fast and by 0500hrs I had to wake Debs to get an extra pair of eyes on the starboard side to avoid pick them up. 0730hrs we radioed Scarborough port control for permission to enter and proceed to the visitors birth. This was nearly low water more springs than neaps and getting onto the birth was tricky, once moored up we went off for a breakfast and stretch our legs. We would leave first thing tomorrow on the falling tide for Blyth.

0600hrs we leave Scarborough for the twelve hour tripback to Blyth. Just as we leave the harbour the wind veers to the NE and drops to 4 kt so we have to keep the engine running and would have to until we are off Sunderland. Just off Whitby we are accompanied by a pod of trip back about 30 strong, a lovely sight in the morning sun as they breach beside the boat. Later the winds pick up and we get the sails up and at one point just off the Tyne the winds are reaching 25 kts NW, Tamara is covering the ground at just over 8 Kts and we expect to be at Blyth within the hour. Then as we approach the bell, the wind disappears and we have to motor the last 1.5 mile to the visitors birth at Blyth and at 1930hrs we tie up back at Blyth nearly four month but for one day till we left

Tamara was delivered on time, without problems, with true professionalism