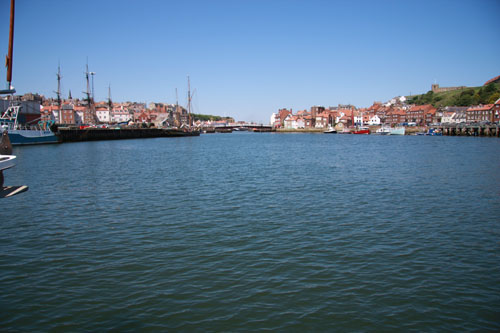 We decided we would take a week off and sail to Whitby for a break. As Whitby is recognised as being one of the more difficult harbours to access and egress due to the tidal currents that sweep strongly over the entrance. The harbour entrance faces North and hence very difficult to enter in anything over an F4 Northerly to Easterly. With this background information we took a weekend visit earlier in the year, stopping over night in the Dolphin the pub right on the bridge. at £80 a night was a tad expensive. This was the first time either of us had visited Whitby, it's a great little town steeped in history, the most obvious, James Cook, who left these shores on several occasions to explore the world in a Bark named Endeavour and later in his ship the Resolution in which he circum navigated the Antarctic. On the 14th February he died, stabbed to death by Hawaiian natives in an argument over a stolen boat. 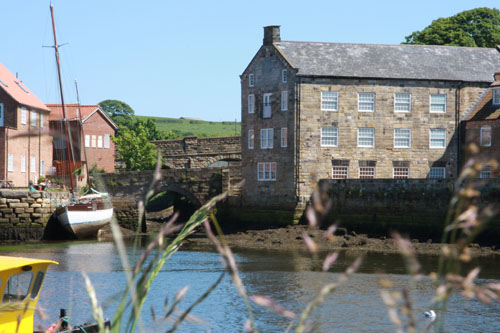 We left Blyth at 1100hrs on the Saturday 30th May to sail to Royal Quays on the Tyne to take on fuel. The wind was 7-8 kt Northerly and was forecast to rise to F5 with gusts over F7. We had planned to then move on to Sunderland for the night, this would be another first for us, We were accompanied up the river by Brittany, whilst taking on fuel the wind increased and was soon over 20 kt. A quick decision was taken to stay at Royal Quays for the night, not having the fuel gauge installed had lead us to over fill the tank and the back pressure had caused the excess diesel to flow past the clips and run below the tank giving the boat an almighty smell, that would take the rest of the week and a full pack of disposable nappies to get rid of (wonderful things for soaking up spillages) 0800hrs Sunday, the wind had decreased but was still from the North, so the sail cover stopped on, the plan was still to head for Sunderland, if the weather held we would continue to Hartlepool. 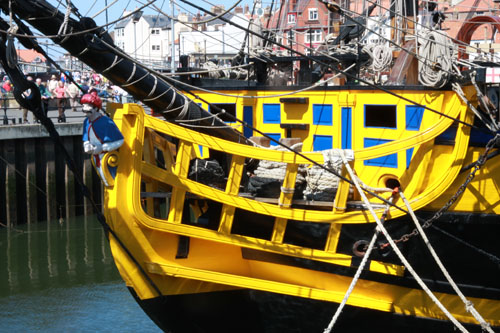 as we progressed with wind dropped of to3 kt an the sea state slight, We arrived at Hartlepool early afternoon, the new engine was performing wonderfully, working on the calculations supplied by Thornycroft we should be using 3.8 ltrs an hour at 1500 revs. On our return journey from Scarborough, two year ago we thought we saw a whale in this area, but the sighting was brief and we couldn't be sure, Teesbay was not to disappoint sailing South through the middle of the anchored merchant ships the whale reappeared, you could tell the difference, this was either a pilot or a minky whale, approximately the same length as Tamara and the length of time it was spending on the surface was much greater than the Dolphins we saw on our trip to Seahouse's. We arrived at Whitby at 1700hrs, radioed into the marina to find there was a special opening at 1730hrs and we were to proceed to the waiting pontoon and raft up the boats already waiting, 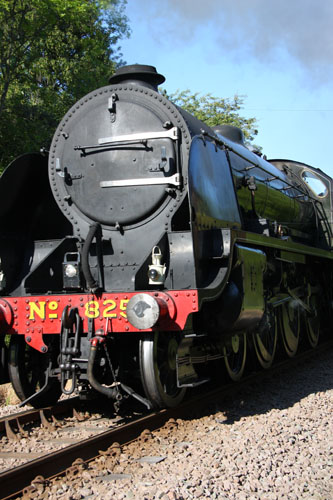 1725hrs, the bridge operators radio us and tell us to cast off, ready for the opening, 10 minutes later we are still floating around waiting for the operators to stop the pedestrians, clear the bridge and swing into the open position. I'm sure they could have made life easier for us and tell us to prepare to cast off especially as the commercial traffic was trying to use the river at the same time. As space is at a premium in the marina, we rafted up to a Jeaneau 36 cruiser and were told by Ian, the harbour master that we could relocate early the next day to an along side berth as a Dutch boat was leaving on the first bridge. Once made fast, we were off exploring Whitby the gateway to the North York Moors Railway that runs a full time table from here to Middlesborough with a mixture of steam and diesel trains, including a black five, the Mallard, the new Tornado and many more. 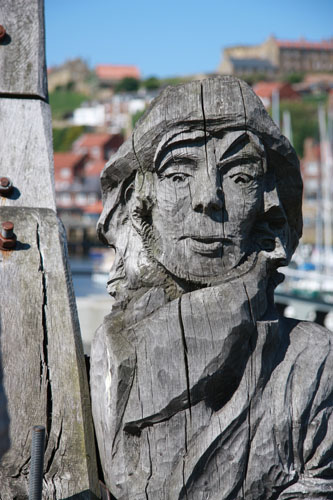 Whitby is a great place to visit, fish and chip here is a must but be careful some charge as much as £7.50 each and you need to look for the shops with the longest queue, there is some rubbish around. This statue is alongside the marina and a plaque gives a brief history of the river side for the last 200 years describing the ship building trades that once flanked the river, you can almost imagine James Cook walking up and down looking for the right ships for his explorations. Keeping an eye on the weather which was to deteriorate toward the end of the week, wind to stay in the North and increase with a SWW issued by the Coast Guard. Trips to the local library every morning, discussions with Justin and Anita showed a break on 8th June Monday morning. this didn't stop us from walking to the pier ends every day to look at the sea.

We took our normal walk to the pier ends, just in time to catch a rescue involving the two life boats and fishing boats. A yacht approaching the piers had lost his engine, had then refused a tow from the life boat. As he approached the piers, he was on line for entry, the ebb tide then took hold and he was swept away from the piers and into the breaking waves and the beach. The fishing boat had gone out to try and help, then the two nearly got over turned, the yacht was flattened by the waves and all appeared lost. The ILB was launched followed by the all weather boat which managed to get a line on board towing the yacht to safety. Very exciting to watch, but all unnecessary when you think the skipper could have avoided this by arranging for the life boat to meet him out at sea in relative safety and get a line on when there was plenty of sea room. However! Whitby- £22.20 a night -lecy £1.00 cards, toilets, showers and fuel in cans at £0.95 a ltr At 1430hrs we decided to leave Whitby on the edd tide, the wind was Easterly 15kts, a good swell was running, Lady Rosemary(Justin and Anita) would leave with us. They would put into Hartlepool and we continued to Blyth in what was a lumpy journey. We arrived back at Blyth at 2300 hrs, we made fast the boat and left the tiding up till the Sunday morning. So far this year we have sailed 173mile