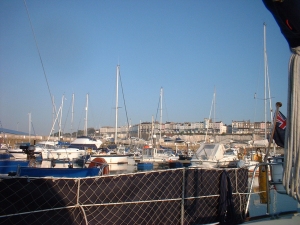 0930 All the calculations had been completed for Dover and a departure time of around 1200 hrs, When we woke and the weather again was no wind clear blue skies and a forecast to deteriorate for the weekend, during a conversation with the boat next to us, who said they were heading for Calais for a couple of days and would be back before the weather changed for the worst. 1000 hrs we had completed all the calculations that would get us to Calais on one rising tide. They were fed into the chart plotter and checked very carefully, no mistakes could be allowed on this leg, we had to cross four traffic separation zones and content with the ferries in and out of Calais. The sea was like a mill pond we couldn't have got better conditions for our first crossing of the channel if we had planned it and waited for weeks. 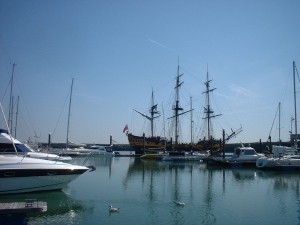 The Grand Turk in the background, Tamara in the fore

1100 hrs (Dover LW -0011 hrs) all fuelled up and waiting for permission to leave Ramsgate, a ferry and the dredger were entering and after that we were clear to go. I radioed Dover Coast Guard and logged the passage plan giving our ETA of about 1600 hrs As we left we joined in on a flotilla of boats from two clubs based in the Medway who were holding a rally in Calais over the weekend. 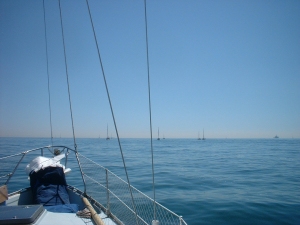 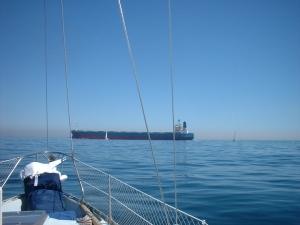 The ones you have to miss

The passage went straight forward with only a couple of large ships to deal with mid channel, but in some places what was worrying was at over five mile out and some depths were still under five meters. However when we reach the separation zones the depths increased to over 50 meters. At one point we were very briefly joint by a dolphin swimming along between the boats. Just before losing sight of the UK in the haze we could see the French coast line looming up, and before long the unmistakable clock tower of Calais harbour, still with just under an hour of tide to run. At times we were making over 7 Kt SOG due to the strong tidal currents of the area. On entry to Calais harbour you peel off to starboard into the port du plaisance, this is locked with a tidal gate and swing bridge. The marina have supplied mooring buoys in the basin to pick while your waiting for HW -0130 hrs for the gate to open. At 1630 hrs we rafted up in the marina, completed all the checking in formalities and began the job of organising the next step of our adventure, which is to get into the canals and through to the Med. We need to decided where we're going to enter and were the mast is coming off. The overwhelming decision of the day is what are we going to eat and where. All the years we travelled in France when the kids were little we never stopped in Calais to look around, we only ever got off the ferry and headed for the country. A couple of hours spent looking around reveals that Calais is a great place to visit with most of the locals willing to help you with the language and of course can speak very good English. We do need to improve our French because as we move further through France we will be expected to speak their language, I do think it will come back to me fairly quickly. 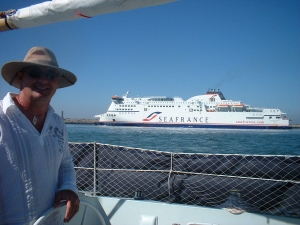