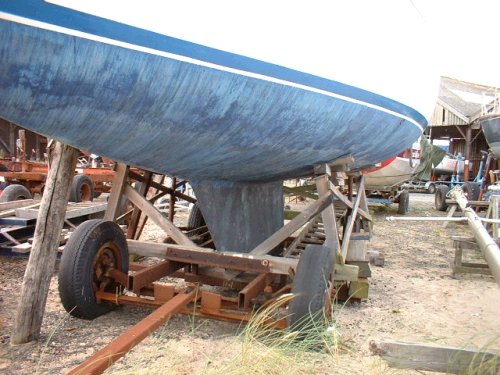 When we bought Tamara, she was sitting on a very weak trailer that was kept up by blocks and wooden wedges. We knew that at some point she would have to be placed on an other trailer to be moved to the crane for launch. This one simply wasn't going to get her there. We continued the work of the first year refit which was to include, rewire, plumbing, gas pipes, new galley equipment and full suite of Raymarine navigation electronics. For the cosmetic side the hull was to be stripped back to the gel coat, keel shot blasted and epoxied, the damage to the bow gunwales repaired professionally. The hull would then be anti fowled. Top sides and the deck cleaned and polished.The interior was to be upholstered, replacing all the foam and cushions, the bulk heads in the saloon was recovered with foam backed lining and all the glazing had to be replaced. 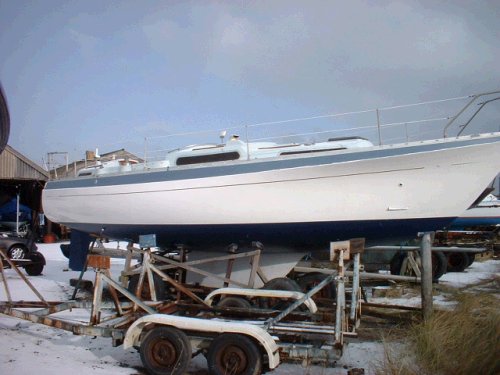 
The first winter arrives but the work continues, she's got her new antifowl on but the keel has to be finished, the undercoat for the gunwale is on and all new glazing in place A replacement trailer had to be found but with Tamara weighing in at six and a half tonne she needed a strong trailer. This is a bad time of year to find a spare frailer due to the fact that most of the boats were out off the water on theirs. The rewire has to be complete and instrumentation installed. In-order to get all the work complete on time for April 22 the work had to be programed into a gnat chart so that should any of he work be delayed due to delivery problems, other work could go ahead without having to pull the boat to pieces again. New bilge pumps and pipe work installed and all new skin fittings and sea cocks replaced and the old gate valves had ceased solid and were of no use what so ever. The engine was to be left till the second year refit as this would be a large job on it's own


Tamara's old engine after a refit and paint


As Andy and I are trained boat lift operators we with the help of Derek and Davy removed Tamara from the water and sat her in Athena's cradle graciously loaned by Dave Kougler. It took a couple of hours to prepare the engine for lifting out as this was to be the easiest method of refit. The engine was suffering from oil leaks, heavy smoke, poor starting and raw water leaks. The engine was taken home and stripped, I had prepared some parts in advance during the summer. Injectors had been re-tipped, fuel injection pump overhauled, refurb kit for the lift pump, raw water pump, screw on oil filter kit, front and rear crankshaft oil seals, starter motor overhauled and a 90 amp alternator to replace the old 35 amp unit. The block was then rebuilt and sent away to be painted and bench tested. While the engine was away

I took the opportunity to remove the fuel tank and supply system. The tank was found to be infected with the diesel bug and a small amount of corrosion in the low corner where the water gathers. It was decided to replace the tank with a HDPE plastic tank constructed for me be a company in Durham. The fuel supply system,shut off taps and water trap/filter was replaced. On return the block and instrumentation was totally rewired. A new exhaust system was also put in as the old system was made from flexy pipe that had developed several leaks. The caloifier was installed and the header tank prepared to feed the hot water system. Hoses had to be manufactured to allow for return flow to the block. After all this it only left the new mounts to be fitted and the unit reinstalled Once in it was then run again for a couple of hours to check for leaks and any problems that could occur after heating and cooling. That completed the major works on the hull