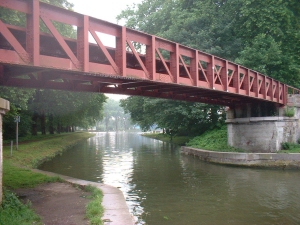 The entrance to Courselles from the canal Grand Gabarit

Courcelles a small town just before KP 24 on the Grand Gabarit Canal. No locks to negotiate so travelling is relaxing and time to enjoy the scenery. We stopped off at the junction of the Grand Gabarit and the Canal de la Deule to Lille. This is a small island formed in the middle of the junction at KP 55. The small leg of the canal that forms the triangle to contain the island isn't used by the commercial barges so the boat can be left safe from the wash. The depth here is sufficient but you have to approach with care. From here to Courcelles the guide book indicates good moorings along the canal banks, We never found any that We would be happy using, some of the banks have been washed out from behind the concrete sides which have then collapsed into the canal giving the false impression of depth. The redundant sides are waiting inches below the surface for the unwary. 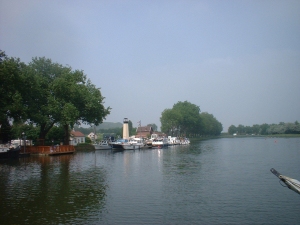 The basin at Courcelles

Courcelles is at KP 35 it's entered from the main canal via a small channel just over 2 meters deep on the right hand bank. It then open up to a fairly large basin which is buoyed to keep the boats to the left bank and leave the right bank for fishing. The pontoons here are new and theirs a friendly hand from the manager to take your ropes and give advice on the amenities. These include water, electricity, showers and restaurant. The town itself is about 20 minutes walk or 5 minutes by bike, where you'll find everything you want, supermarket, fuel at 1.05 euro a Lt., laundry and banks. Thursday night We were treated to the most spectacular thunder storm I've ever seen, even better then Australia. All for 11 euro a night. 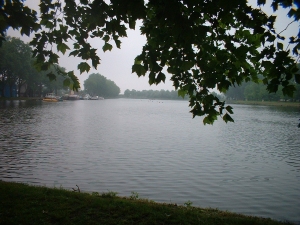 This section contains 7 locks some automatic (when they work) some manned. Following the Grand Gabarit to the junction with the St Quentin canal there three locks to content with. Passing through many picturesque towns and villages with plenty mooring possibilities, however all on the main canal, with the exception of Dorignies which at KP 30 branches off on the left bank, however this is only 1.2 meters deep, in France that means about 1 or less. Caution required!! We passed through two locks at Douia and Couchelettes but couldn't find the branch on the left bank at KP 24 which was supposed to be going mooring off the canal and where We had intended to spend the night. We had caught up with Paul, Jane and the kids by this time so We kept going, looking to reach Cambrai for the night.

The best barge bitch in France, Deb coined the phrase when we saw the peniche captains wifes, most of whom were bigger than the men

Between KP 24 and Cambrai there is another 5 locks nothing difficult but as We turned off the main canal on to the St Quentin, I thought We had taken a wrong turning. The depth drop to less than 2 metered in places and the canal was so narrow with hazards at both sides it resembled more a small river tributary than a canal (it had us checking the chart every couple of minutes for features) We got stuck behind a peniche which was travelling at 2 kt and with no ware to pass We knew We weren't going to make Cambrai. This is a very scenic route and would have been more enjoyable if We weren't having to continually stop the boat to allow the peniche to move ahead, Tamara with do 3.5 kt at idle speed. With he canal being so narrow as well you are on constant watch for peniche coming towards you and shoals. We negotiated all the locks but the last. On arrival the barge bitch told us that the locks were closing because it was seven o'clock and that they were going to be the last through. We moored on the side for the night in a very pleasant, quite spot accompanied by two peniche that also missed the lock. Next morning, up at seven for the locks opening and We were the second through the halte fulviale is just through the lock on the right, it's full of live aboard peniche, mainly British owned, We rafted onto Aventura owned by David and Jean. Cambrai is a lovely town, quite large by french standards, market takes place in the square and the streets on Saturdays and topical French they all pack up for 12. We always visit the Catholic charts when we're on our travels and this is no exception. It's not that We are religious, We are just amazed by the skill and ability of the people who built such fantastic buildings. The church of St Grey formally the Abbey of Saint Aubert is just off the main square. The present church was built in 1739 but this has been a religious site since the Roman era. The present church still bears the marks of the second world war in so much as the columns are pock marked with bullet and shrapnel marks. Tom and Winston caught us up here, they're looking to travel with us to Paris. Cambrai- facilities a good overnight stop, 7 euro shore power if you can get one for the live aboard peniches, fuel pump at the entrance, water and showers. No pontoons but plenty of peniches to raft to.


We had initially planned this trip for two days but We were making very good progress so We just kept going. All the locks are controlled by you with the aid of a small hand set you are issued with at the lock before Etrun. Straight forward to use, on approach you push the blue button which prepares the lock and opens the gates, once inside and secure you lift the blue rod and this begin the fill process. Once full the lock gates open and your away. Two recommendations for locks are two boat hooks and bring spare heads, shafts you can buy here, chandlers are like hens teeth. Use the hooks to place the mooring warps over the bollards in the locks and don't go to the front of the locks otherwise you have great difficulty with the turbulence, We got battered for a full day be for We decided to travel alone, getting the lock to ourselves. Using this method We negotiated 15 locks and the 33 km to the other side of the Riquevel tunnel. 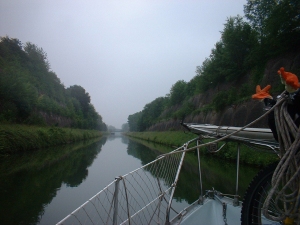 Riqueval Tunnel approaches
Around mid day just as we are approaching an narrows and a bridge We picked up something on our propellor which took away all of our drive. We managed to coast it to the abutment under the bridge were I jumped a shore, left Deb on the wheel to apply full port lock to keep it out from the side. I pulled the boat forward a couple of hundred yards to clear the narrows and secured it to the trees. 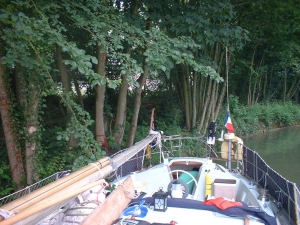 preparing for a swim, I have seen cleaner rivers

After doing all the usual obvious checks, i.e. your props still on and connected engine temperature and oil pressure are all right, it was time to dig out the diving gear and go and cut off what ever was there. In the murk of zero vis and a water temperature that according to the instruments was supposed to be 19.5 deg Cel, feeling my way around I found a large heavy duty polythene bag wrapped around the prop, a couple of minutes with a sharp knife and the culprit was despatched to the trees. How I love swimming in an open sewer, having got back on board and downed a healthy drink of Coke a Cola(this is a well know remedy for killing any bacteria you may swallow) dried, dressed and completed all the checks that the prop was clear, Tom was along side by this time to assist should we have needed a tow. On approach to Riqueval tunnel it's very impressive, a 6 km tunnel that was commissioned by Napoleon the first in 1802, it was dug by prisoners by candlelight and hand picks it was inaugurated by Napoleon and Marie-Louise in 1810. You are towed through with a tug that can tow up to 30 commercial barges (45000 tonne) at any one time. You all line up in order of size biggest at the front little un's at the back, just out side the tunnel at Vendhuile. The information states that the tug operators complete the rigging of boats for towing. This is not so, We had to rig our own, you tie onto the boat in-front using two 30 meter lengths of rope crossed to stabilise the tow, you have to supply the rope( so bring them with you). 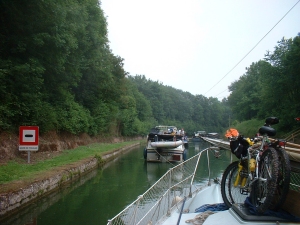 Under tow into the Riqueval tunnel
The bargee didn't even walk the length of the tow to make sure everyone was secure and cast off ready to go. When he blasted the horn to signal We were leaving I had to run forward and pull toms stakes out of the ground as he was busy with other warps. After about 20 minutes in the tunnel you realise the potential for damage s you hear other boats being pulled along the walls and walk way, the bargee doesn't care they just keep going. Tom in-front of us suffered a burst fender and damage to the pull pit rails, luckily as yachts have quite big rudders compared to power boats I managed to keep us out of trouble. At the end, as soon as the tug leaves the tunnel it stops with only a blast of the horn to tell you something's happening. You have to get the engine started and gather in the rope to stop it getting caught in you prop, cast off the boat behind and miss the boat in-front NOT MY IDEA OF FUN. My recommendation is that unless you have no other choice as We didn't due to the Canal De Nord being closed, give this a miss, unless you like damaging your pride and joy.
﻿